skip to main | skip to sidebar

(copyright Warner Bros. Discovery)
Yeah, I'm feeling not feeling very charitable today. I've been struggling to overcome a new health problem that cropped up last week, and it's helped sour my mood towards this topic. But, is anyone not surprised by this? Corporate mergers usually mean getting kicked to the curb for the worker.
It's one thing to be nimble and versatile. I was at a lecture at Otis a few years ago where the panel discussed how new animation artists now have to be ready to make lateral moves away from the traditional studios to games, new media, and online companies that you would never associate with animation. But I still feel we need to really twist congress' arms as far as helping Americans cope with factors such as the outsourcing of jobs, and the repeal of the fairness doctrine. This situation with Discovery, and the overreach of Netflix sounds like another dotcom bubble to me. Here's an oldie but a goodie-
https://www.youtube.com/watch?v=nh6Hf5_ZYPI
https://animationre-creation.blogspot.com/2022/04/discovery-aquires-warner-media-from-at.html

Little memory jolt from Tom Sito on Facebook today: Katsuhiro Otomo’s classic film Akira premiered in Tokyo on July 16, 1988, 34 years ago. I picked up this handout that was floating around the east side when I was working in Beachwood, Ohio. Just a hasty, but still stylish paste-up that was reproduced on an old photocopier. 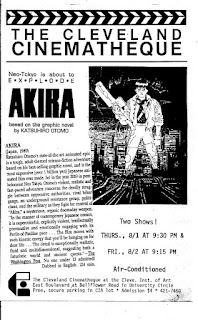 I think this was from 1989 or 1990? But Akira brought the house down, back at the good ol' Cleveland Cinematheque. Akira was a giant step away from the old Speed Racer and the original Transformers. This director meant business. No one under 13 admitted!

By now, most Anime' fans know of this grim, near future dystopian tale: Two friends in a motorcycle gang stumble upon a secret government plan that made nuclear weapons look like mere firecrackers. Akira helped develop an appetite in the U.S. for more serious work like the Animatrix, and the great films of Hayao Miyazaki.

So, charge up your bikes, rile up the gang, and take the wild ride again!

Posted by Ken Roskos at 8:47 AM No comments:

Here we go: I finally caught Dreamworks' "The Bad Guys" on Blu-ray. While I didn't fall in love with it, The Bad Guys has some elements that I admire. Even with a healthy box office turnout, Comcast/Universal didn't waste much time putting the movie out online and out on disks. After the loosening of Covid lockdown guidelines, the movie has generated a good buzz. The end credits even mention that the film was made during "unprecedented times". After the disasters that started in 2020, "The Bad Guys" is a part of animation film history, now that I think about it. Without high speed internet, and Zoom meetings, effective animation production would have been on a much rougher road. 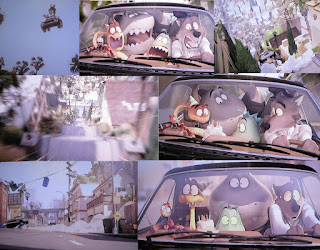 And it's far from being a dud: Bad Guys has likeable characters, homages to famous heist movies and yet, callbacks to classic Looney Tunes, and even some Anime'. I think my old supervisor on Ren and Stimpy would have called it "snapimation" in the way characters "pop" from pose to pose. Mr. Wolf stands up to some potentially lethal punishment with their crazy cartoon logic, and Bad Guys is also following the trend to work some traditional "2-D" elements added back into a 3D computer animated film. Animation director Pierre Perifel brings in smears, flat style designs with smoke and facial expressions. Some of the animation even reminds me of Osamu Tezuka , with the eyes, mouths and outrageous poses.The overall background design is based on a present day Los Angeles/So Cal environment, with a humorous, and even glowing, sort of romantic style.

The Bad Guys universe is a world primarily populated by cartoon humans, with the stars being the only few "funny animal" characters. Mr. Wolf and his crew appear to be magical characters that have negative histories going back to mankind's earliest myths. Their ostracization seems to have contributed to their becoming bank robbers, and troublemakers in general, reveling in their revenge against decent society. The plot revolves around the characters' attempt to "go straight", and their own secret longings to be accepted by the outside world. Naturally, things go awry, in a fun, crazy way. And, of course, Mr. Wolf's life is complicated when his heart is touched by accidentally helping a little old lady, and then the attentions of a lovely young vixen, who also happens to be their state Governor. 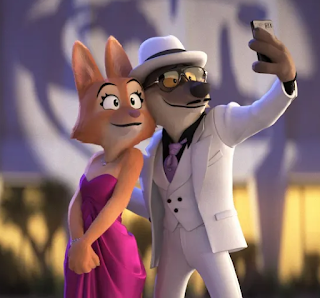 On the downside, the film is very dialogue heavy. Feeling a bit jaded, I first watched BG with the directors' commentary on. Without the performance of the voice actors, the movie sort of just clicked and popped along. And being a tribute to Quentin Tarantino movies, the film depends quiet a bit on flashbacks, with healthy doses of exposition to explain events that occurred off camera. 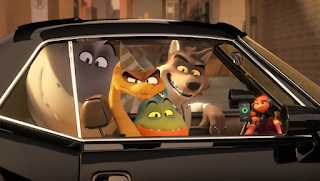 But all in all, The Bad Guys is a nice break from our Covid, politics and war nightmares. Definitely worth checking out.

Full Disclosure: I am an employee of the Animation Guild IATSE Local 839, so what I'm posting here is a matter of public record. Hopefully, a majority of our members will vote on these contracts, one way or another.

Posted by Ken Roskos at 9:52 AM No comments:

Here's some amazing work by Felix Colgrave. Born in Tasmania, now based in Melbourne, Colgrave blows the viewers' minds in the most unexpected, and dare I say it, charming way. Felix has a background in TV ads, music videos and video game cinematics, but he presently is focused on his own work. Pulsing to the music of the band Fever The Ghost, this little old man and his dragon, "Long Morrison", travel to the center of the earth. Their mission: turn the world into a party planet! But then, it looks like it's just their job, day in and day out.

From what I've read, Colgrave uses After Effects to animate his fantastic art. Virtually all of the exposure of his independent work comes from using the world wide web. As far as I can see, no TV, film or DVD gave his work any publicity. There's some Monty Python surrealism, with even a touch of Moebius in this short. While there's nothing really groundbreaking in Colgrave's techniques, or use of animation technology, I'm putting his work down as an innovation simply from his use of the internet, and the fearlessness of his ideas.

All of which has gained him an audience!

Posted by Ken Roskos at 9:00 PM No comments:

Some good news from the Edinboro Universtiy Alumni Newsletter: 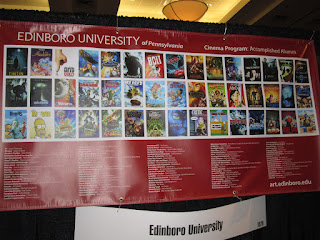 (my photo from CTN Expo in Burbank CA)
My second old Alma Mater Edinboro made a mark in the Top 25 East Coast Animation Schools and Colleges for 2022, going up against heavy hitters such as School of Visual Arts, New York, New York and Rhode Island School of Design, Providence, Rhode Island. Edinboro is accredited by the National Association of Schools of Art and Design (NASAD).
Nice to know the 'Boro's is still slugging it out, in spite of the Covid lockdown, and the university being merged into the new Pennsylvania Western University with Clarion and California (PA) universities. While my career didn't go as far as distinguished alumni as Bill Waldman or David Filoni, I'm still grateful to Edinboro and the teachers there.
https://www.cbsnews.com/pittsburgh/news/cal-u-clarion-edinboro-pennsylvania-western-university/

Posted by Ken Roskos at 8:18 PM No comments:

Hello folks, this article has been giving me trouble for a while. I've been an on and off fan of the Gorillaz for some time, and they've seemed to have fallen off the pop culture radar. Their music and graphic style from the '90's is still interesting to me, but I've had trouble collecting info on the artists and writers on this unique and outrageous virtual band. Been working on this since the pandemic started, so it's kind of slopped out down below. Publishing it "as is" may provide the spur for me to tighten up my writing here. We'll see.

(original copyright Jamie Hewlett and "Zombie Flesh Eaters")
The virtual band members: Murdoc - bass, "2D" - vocals and keyboards, Noodles -guitar and vocals, and Russel - drums, percussion.
I first heard the Gorillaz while riding along in my sister's truck over the Holidays on a dark winter night years ago, as we rumbled over the snowy back roads in Amish country. "Dirty Harry" came on her truck's sound system, and I was delightfully haunted by the whole bizarre experience.
https://www.youtube.com/watch?v=cLnkQAeMbIM
https://www.imdb.com/title/tt6841646/fullcredits/?ref_=tt_cl_sm
This track had an enticing trance-dance-pop feel, with some killer rap that came in to break the spell. Later, when I picked up their DVD debut album set, Gorillaz Phase One: Celebrity Take Down, I was struck by the graphic underground comics style of Jamie Hewlett, who created these four bizarre misfits, streetwise, sort of rough and tumble characters, resembling his character designs from his Tank Girl comics.
(Gorillaz Phase One: Celebrity Take Down features the animation of director Pete Candeland, Dave Antrobus, and Chris Hauge.)
https://www.imdb.com/title/tt0474700/fullcredits/?ref_=tt_cl_sm
Who were these bizarre, even frightening characters? They seem to be some sort of gang, or part of some criminal underworld. Again, comic artist Jamie Hewlett oversaw the dark, sinister stylized limited animation, with some 3D CG elements, mostly backgrounds or characters with vehicles.
Blank eyes, bad teeth, and some character designs that flirt with racial stereotypes. There's some demonic possession too. But they were also politically aware in a sardonic, but progressive way, and technologically adept as well. Just what EMI, Parlophone, ‎Virgin‎ and later ‎Warner needed to present what is essentially Damon Albarn's studio band work, with rotating members who provided the real music. Sort in method that was used by the Archies, or the Monkees. And yet, their music has polished, professional level of production quality that gives the Gorillaz a successful multi-media foundation.

But, to sum up: It's good, "clean" dirty fun. The Gorillaz give me a chance to be a vicarious hoodlum. From time to time. 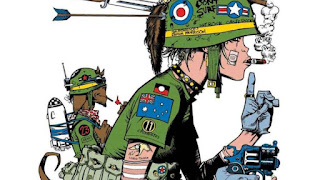 This bad buzz turned up on my Facebook feed a couple days ago. It sounds like it's the end for Jeff Smith's "Bone" Feature. Jeff Smith created a cleverly written and beautifully designed comic that was geared to be just right for animation. No dice. "Bone" seemed to be cursed ever since I visited their old Character Builders Studio back in Columbus Ohio. Hey, it's not my fault. Maybe management had something to do with it... 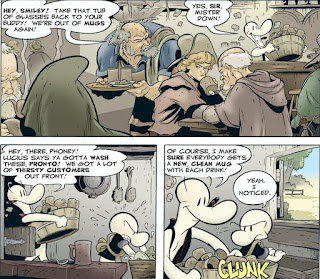 And because, the Bone comic dealt with some mature issues, such as smoking and drinking alcohol, the censorship battle sprung up some years ago. There seems to be a rigid view of what an animated feature should be, and what "ingredients" it should contain. Heaven help up us if we get something refreshing, nutritious and imaginative besides the usual fast food.

It's been a long time since I read the comics, but I remember Bone's story beginning to approach an epic that borrowed a bit from the Lord of the Rings trilogy. Jeff Smith's influences from classic animation, and Walt Kelly' "Pogo Possum" also added to a lively mix of comedy, action and great characters interacting. Plus, some mysteries and drama that arise with the female leads, and their connection to the Dragons. It would be quite a story to squeeze all that material into one feature, along with all the desperately needed pop culture and music to "help make it a hit".

Get back to the basics here.